If the first two days of the Conference were the classroom, then the third day was the field trip, where delegates participated in 26 Building and Urban Tours and learned from the companies responsible for the design, construction, and management of various projects through on-site presentations and exclusive access to the building/area itself. 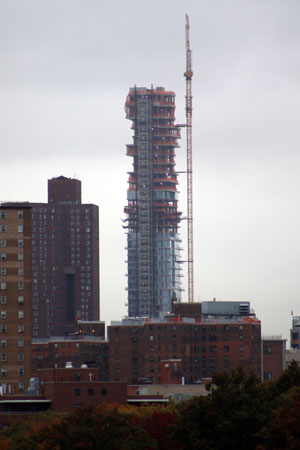 Attendees on the Construction Tours had the pleasure of visiting the likes of 30 Park Place, 56 Leonard Street, and the soon-to-complete 432 Park Avenue. Some delegates were given the opportunity to visit the factory where per-fabricated modules for 461 Dean Street are built, seeing firsthand this new construction process.

Meanwhile, the Completed Building and Renovation/Historic tours took participants through New York icons new and old, each featuring idiosyncrasies that make them stand out among the hundreds of other tall buildings in the city. Some – like Bank of America Tower and the newly upgraded Empire State Building – displayed state-of-the-art sustainable infrastructure and mechanical systems, while others – like the renovated Woolworth Building and Eight Spruce Street – showed participants new possibilities in tenant layout and architectural flash.

Finally, the Urban Tours afforded guests the opportunity to explore the public and social aspects of tall buildings within their metropolitan surroundings. These excursions traversed popular amenities such as the High Line and the urban domain of the World Trade Center, even branching out beyond Manhattan to Jersey City and Brooklyn. A tour was also held at Hudson Yards, which when complete will be the largest private real estate development in American history. In each instance, social considerations at the ground level are being used to better integrate tall buildings into the fabric of the city. 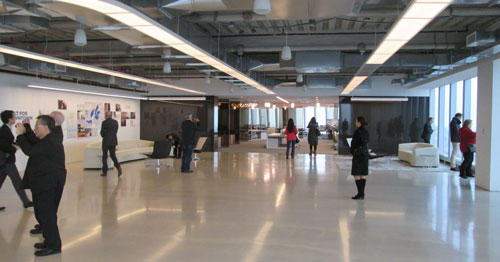 The One World Trade Center tour began in the Vesey Street lobby, whose high ceilings and marbled walls lent an air of cool reserve to fresh arrivals from the frenetic streets. Attendees were met by Rob Becker of The Durst Organization, the building’s developer, who guided attendees to the 64th floor. Here, a marketing suite shows potential configurations of office space for various types of tenants on one half of the floor, while the other half is raw space, demarcated only by text and figures indicating the dimensions of the space.

The entire tenor of the marketing approach to the building indicates the dramatic change in potential clientele for World Trade Center that has taken place in the last few years, as downtown Manhattan becomes a fully-fledged mixed-use neighborhood, as opposed to a daytime-only business district focused mostly on the financial sector. From its emphasis on green credentials (the building’s LEED Gold status is embossed on a green wall), to its open-plan configuration and access to transit, the pitch is clearly aimed at the Millennial-generation workers in creative and technology industries. This is a marked difference from the brief for the original World Trade Centers, which was predominantly back offices and headquarters for financial trading firms. 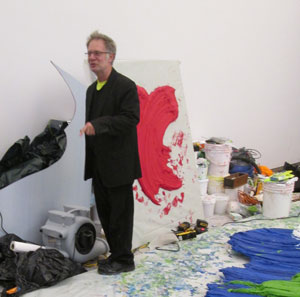 For some tenants, the cool gray of the lobby spaces lacked color, so the response of The Durst Organization was to commission art for the space. Along the south interior wall, a gigantic abstract art piece by Doug Argue runs almost the entire length of the space. Another abstract piece dissembles a chapter of Moby Dick into a “starscape” comprised of individual letters. The tour’s most unexpected encounter was with artist Don Martiny, who was busy assembling his works for the west lobby, comprised of swirls of color inspired by the Hudson River School painters such as Frederick Church, Martiny said.

Released into the transportation corridor at the end of the tour, many of the attendees then did the obvious thing – they made a beeline for the observation deck, which opened recently.

Jersey City with 30 Hudson at the left

The second half of the tour was guided by Robert Cotter, Planning Director of Jersey City, who has held the position more than 25 years. During this time he has presided over great change, and his lively narrative reflected this. The tour passed high-intensity development zones such as Journal Square, a major transit junction where a cluster of towers is rising to rival those along the city’s waterfront. Also seen were areas where the magic wand of investment has yet to wave, as Jersey City cleans up after its prosperous but highly polluting industrial past and makes way for its future.

Scenes From the Day