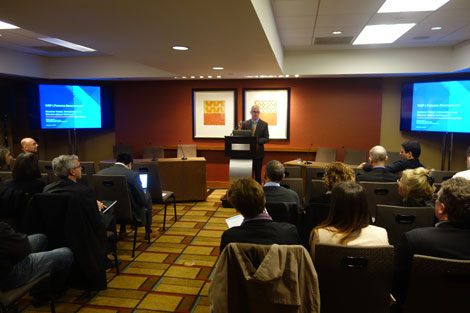 This room was a frequently packed house, with thought provoking and insightful presentations that spanned the globe with insights into what it means to build vertically.

Greg Kelly, COO of WSP | Parsons Brinckerhoff, offered an interesting look at the infrastructure impacts of density with a case study of the Hudson Yards project. John Britton and Steve Hargis of Woods Bagot followed with a look at the vertical campus as a solution for increasingly dense urban environments.

A thoughtful presentation by Paul Scott of Make Architecture and Bill Price and David Healy of WSP, centered on London’s affinity to give nicknames to their new landmark towers. A London and New York comparative Q&A ensued, with recognition that cities move from tower naming to address identifications as their vertical densities increase. New York’s branding for the Empire State and Chrysler Building’s, compared to the more current One World Trade Center or 432 Park Avenue towers, illustrated this point.

Information on One World Trade Center was presented first by Judith Dupré, Architectural Historian and Author, with an inspiring look at the significance of the project. This was followed by more detailed discussions by Ahmad Rahimian, Yoram Eilon, and Kenneth Lewis on the challenges and solutions that were brought forward in the design. Highlights included the first use of 14,000 psi concrete in New York. The tower contains a concrete core to organize its spine, providing a stiff center to the dual system frame, as well as hardened enclosures for the vertical means of egress. 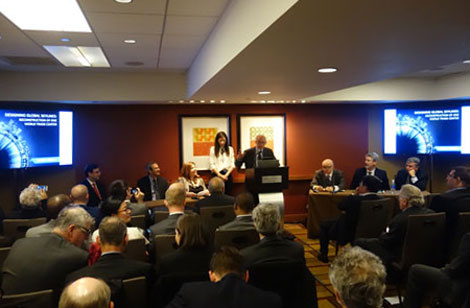 Panel discussion on the engineering of One World Trade Center.

In his presentation on 53 West 53rd, David Penick, Managing Director of Hines, New York, insightfully explained how the zoning, entitlement, and air rights transfer processes of New York – while cumbersome and long in duration – have allowed for the construction of these towers. He described how New York’s luxury residential price points (at US $7,000 – US$8,000 per square foot and higher) have made these projects financially viable, even with their 15-plus-foot floor-to-floor heights and ultra-slim aspect ratios. He also cautioned that market saturation would limit how many of these projects will ultimately be successful in this current market cycle.

Dana Getman, Lead Architect of SHoP Associates, described the 111 West 57th Street tower and its ultra-slim aspect ratio of 1:24. He showed how the one–unit-per-floor tower was configured with a scissor stair and two elevators for vertical circulation. He also highlighted their efforts to define the tower form as seen from distance as well as at a more intimate scale.

Technical discussions looked at how the structural frames on these towers have been pushed to the building perimeters; how the 15 to 16-foot floor-to-floor heights have allowed for perimeter beams, bracing, and walls, while still allowing for significant views from inside; and how tuned mass damping systems and wind-tunnel optimization help control human perception to motion.

The Urban Challenges of Density were debated in a moderated session Tuesday afternoon, with insights from around the globe by Carl Galioto of HOK, New York; Nick Jackson of Eric Parry Architects, London; Ken McBryde of Hassell Architects, Sydney; James Von Klemperer of KPF, New York; and Peter Weingarten of Gensler, Oakland. Notable focus was given to the need for infrastructure and mass transit investment, and the importance to maintaining quality of life – as it is a driving force behind where people choose to live. The last presentation of the day was given jointly by CTBUH Trustee Vincent Tse, Managing Director and Building Services of WSP | Parsons Brinckerhoff, and Herbert Lam, Director and Building Services of WSP, on the challenges of vertical transportation for the world’s tallest buildings.

The sessions were closed by David Cooper, bringing to full circle the two days of presentations.