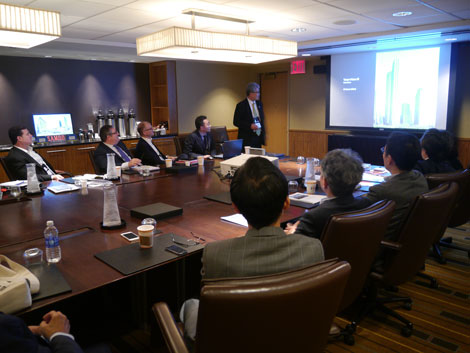 Specific topics under consideration in the Korea Host Room dealt with the Korean high-rise building society and focused mainly on the Haeundae Resort Complex.

On October 26th and 27th, the Korea Host Room was the site of several special presentations hosted by SAMOO Architects & Engineers. Specific topics under consideration dealt with the Korean high-rise building society and focused mainly on the Haeundae Resort Complex, which consists of three high-rise towers: the 101-story Landmark Tower and two 85-story residential towers. The complex is currently under construction in Busan, Korea on the country’s southern coast. The room’s programming was organized by SAMOO to highlight different aspects of the development, as well to present other projects in Korea and to discuss the sustainability of Korean high-rise developments. There were also several opportunities provided for networking among attendees.

In the morning session, no presentations were scheduled. Rather, SAMOO exhibited some of their projects and showed a video clip about Haeundae Resort Complex. Representatives were on hand to answer questions about the project as well as other SAMOO projects, careers with SAMOO, and general Korean construction industry queries. Many people visited and were impressed with the room.

Presentations began in the afternoon session, with lectures given by the complex’s architectural firm, structural engineering firm, and finally by SAMOO themselves. The first presentation, by representatives of Skidmore, Owings & Merrill, dealt with the initial concept design of the complex. Next up were representatives from DONGYANG Structural Engineers Co., Ltd. – including the CTBUH Korea Chairman and Country Representative, Dr. Kwang Ryang Chung, Dong Yang Structural Engineers – who discussed the overall structural design of the complex and included an in-depth analysis of the chosen structural systems. Finally, Dong Hoon Kim of SAMOO presented some of the unique challenges of the project and differences of the residential towers. The audience showed an interest in the particular shape of many Korean buildings, and were also interested in the construction methods of the high-rises. Accordingly, they had many questions for SAMOO and DONGYANG.

After all the presentations concluded, SAMOO held a networking party in the evening. They prepared cocktails and hors d’oeuvres for the guests, and representatives were again on hand to assist anyone with an interest in Korean projects, or anyone who wanted to make new contacts with Korean architects and engineers.

Many more engineers visited the Korea Host Room on the second day of the conference to get information about SAMOO and the Haeundae Resort Complex. SAMOO prepared fresh coffee and snacks, and guests were satisfied with the networking opportunities and the information provided.