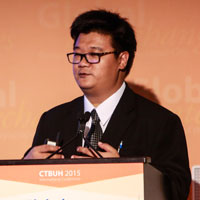 The Structural Design and Construction of MahaNakhon Tower

Bouygues-Thai was appointed by PACE Development Corporation PLC as the structural contractor for the design-build contract of MahaNakhon Tower, soon to be the tallest tower in Bangkok, Thailand standing at 314 meters. This presentation presents the “behind-the-scenes” story for the design and construction of the main structural components: the mat foundation, core walls, mega columns, outriggers and floor plates. It is particularly notable that the set-back architectural layout on the higher floors creates an undesired lateral displacement of the tower due to its unbalanced gravity loads. A pre-setting strategy was adopted to address this problem. 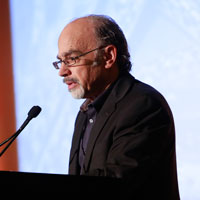 
“Modular Architecture in a Flat World” There is an urgent need for a transformation in the way we design and build our cities that will bring down costs, and that will attract people to live in dense transit-based urban neighborhoods. This presentation will explore a specific proposal for a new type of modular building system, an approach to mass-customized modular architecture that can be manufactured and marketed on a global scale, based on the re-design of the standard shipping container as a purpose-engineered chassis for mid- to high-rise buildings. The ramifications of a globally distributed system of modular building are far-reaching, and will engender new modes of project delivery and new relationships among architects, planners, developers, builders and a nascent global modular manufacturing industry. 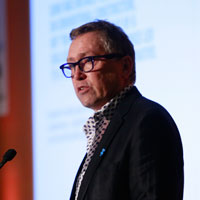 The Construction of a High-Rise Development Using Volumetric Modular Methodology The SOHO Tower is a 29-level modular building in Darwin, in the far north of Australia, a cyclonic region. The building was designed to incorporate a basement and eight floors built with conventional reinforced concrete followed by 21 levels of volumetric modular apartments. The modules were constructed and fully finished in Ningbo, China and shipped to Darwin.

Unlike most modular systems, a concrete floor was used with concrete columns poured on-site into formworks contained within the modules. The buildings lateral stability system came from the central core using a modular precast concrete system, above level 7.

The choice to "go modular" was driven by a constrained and high-cost labour market. The concrete floors were initially a client request, but proved to have other advantages. The concrete columns satisfied the loads generated by 21 levels of concrete-floored modules.

As the medium that ultimately realizes the physical manifestation of design and consummates the concentrated efforts of entire project teams, modern construction practices have had to keep pace with the demands of increasingly complex design criteria. The industry has met this challenge with entirely new methods of construction, which not only give greater flexibility in design, but drastically shorten project timelines. This session outlined several construction advances that are currently being implemented and explored around the world.

Kanokpat Chanvaivit, Senior Manager, Bouygues Thai Ltd, delivered the first presentation featuring the recently topped out MahaNakhon tower, the new tallest building in Thailand. Chanvaivit first focused on the complexities of the design and construction process for a supertall building in the densely populated city of Bangkok with high levels of traffic congestion. The project required a design-build approach and construction staging that would allow for the steady flow of material deliveries to ensure that the concrete mix for the structural frame of the tower wouldn’t “get too hot” before delivery. Chanvaivit states that the tower’s seismic design was based on CTBUH recommendations and its unconventional form was subjected to 36 directions of wind loads during wind tunnel testing. To construct the tower in the soft soils below Bangkok, 129 piles were drilled to a depth of 65 meters and then capped with a massive 8.75-meter-thick mat foundation, so large that the concrete pouring took two months over the course of 12 consecutive Saturday nights, the least congested time periods for Bangkok traffic.

David Wallace, Senior Associate, FXFOWLE, presented next on advancements in modular construction and their application to high-rise design. Wallace stressed the need for rethinking conventional residential construction practices, as global population growth will require the need for 500 million new housing units by 2050. Urban land cover is increasing at twice the rate of population growth and with car ownership rates “poised to explode” in developing countries, he emphasized the need for shifting population growth to infill sites within established cities while researching methodology for driving down construction costs to make urban living spaces less expensive than “stick built suburbia.” He then explained the concept of using the dimensions of an international shipping container as a standardized building module. These Volumetric Units of Construction (VUCs) could then be arranged into the forms of urban rowhouses, mid-rises, and high-rise buildings by modifying the supporting structure.

The final presentation by Phillip Gardiner, Managing Director, Irwinconsult, discussed the construction of the 29-story SOHO Tower in Darwin, Australia with VUCs. While this project is presently the world’s tallest modular building, the design process began with the intent of conventional construction, but a labor shortage and high cost estimates led the design team to experiment with the idea of modular units. Gardiner explained the complexities of pursuing this construction method, including the process of changing the structural frame of the tower from steel to concrete in order to reduce the fire code requirements of the VUCs and satisfy the skepticism of lenders financing the project. The VUCs were assembled in China and shipped by ocean vessel to Darwin, where the hot and humid climate with exposure to corrosive sea salt caused rusting of the steel framework of a few units during transit; underscoring the need for better quality control in foreign off-site factories when applying protective coatings. Gardiner explained that future projects should consider keeping the weight of VUCs below 20 tons for easier crane lifting and emphasized the need for rain protection during assembly.