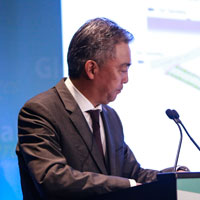 
“Developing Tall Buildings and Urban Places, in Japan and Elsewhere”

Developing Tall Buildings and Urban Places, in Japan and Elsewhere A city is a stage where a wide range of activities take place. An internationally competitive city is one in which diverse human interaction and cooperation yield new businesses, new value, and new lifestyles, all of which have a tremendous global impact. The magnetic power of the most successful cities in fierce global-level competition with other cities is rooted in their overall comprehensiveness. To increase cities’ overall comprehensiveness, we must look beyond pure economics to also focus on urban functions, such as research and development, cultural interaction, livability, the environment, safety, and accessibility, in order to ultimately design ever-more excellent cities. 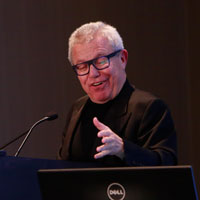 
“From New York to Busan: Reflecting Culture in Urban Design”

From New York to Busan: Reflecting Culture in Urban Design Overpopulation, climate change, aging infrastructure: the threats facing tomorrow’s cities are, in many ways, design problems. The challenges of today’s world have to be solved with creativity that supports the development of an inspired, innovative, and diverse society for the future. As we look to create vibrant, global cities, the biggest challenge is how to build tall without losing the culture, history, and spirit of these rapidly changing places. Design solutions have to embrace the values of humanism in architecture that is forward-looking, sustainable, and bold. Cities have to respond to the dynamic nature of urban living, with new patterns of planning that can adapt as freely and quickly to the ever-changing world to be successful, desirable, and lasting. How do we build tall while enhancing the human scale of neighborhoods and street life?


“SKYSCRAPER: Driven From Inside Out Towards Nature”

SKYSCRAPER Driven From Inside Out Towards Nature An essential element of skyscraper architecture lies in its adaptability to an existing environment. For its massiveness in height and size, a skyscraper, while becoming a new landmark, brings inevitable influences – both positive and negative – to its surroundings. It is in that notion that Haeundae Resort Project (HRP) seeks for inspiration in nature as a key design principle, believing it is what will effectively bridge a high-rise and society together. 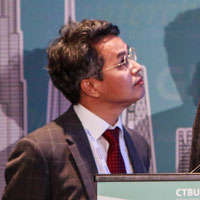 
“SKYSCRAPER: Driven From Inside Out Towards Nature”

SKYSCRAPER Driven From Inside Out Towards Nature

An essential element of skyscraper architecture lies in its adaptability to an existing environment. For its massiveness in height and size, a skyscraper, while becoming a new landmark, brings inevitable influences – both positive and negative – to its surroundings. It is in that notion that Haeundae Resort Project (HRP) seeks for inspiration in nature as a key design principle, believing it is what will effectively bridge a high-rise and society together.

Daniel Libeskind, Founder, Studio Daniel Libeskind, and the first speaker of the session, took the audience on a trip from New York, through Milan, and finally to Busan, South Korea. In each city, Libeskind highlighted how local identities of place were used to drive sincere and unique human experiences in various high-rise complexes. He outlined how these considerations, in addition to new understandings of public space and what it truly means to be a sustainable community, were at the heart of plans for the World Trade Center New York, the Haeundae I Park Marina in Busan, and the CityLife development in Milan.

“Why did Rome fall? It was not because it was invaded – it was invaded because people lost interest in it,” Libeskind began, provocatively. “A lot of buildings have no story to tell, but great neighborhoods are about the human spirit.” Libeskind chronicled how the human and emotional factors needed to be considered in design projects, particularly those conducted at a dwarfing scale. In Busan, the Haeundae I Park Marina was sculpted to harmonize with its seaside location, through curving rooflines and plans that yield views of the sea deep into the site, as well as access to its breezes. In designing the project, Libeskind simultaneously honored Korean concepts of natural beauty in architecture, such as ocean waves, but also stood against the typical 1950s extruded box that dominates the nation’s landscape today. “I am allergic to extruded boxes,” Libeskind proclaimed.

Also in Busan, domestic architects Samoo took on some of the same issues on a site visible from Haeundae I Park Marina for the Haeundae Resort, consisting of the 412-meter mixed-use Landmark Tower and two shorter residential twins. The splayed floor plans and pronounced curvature of the buildings spoke of a similar “allergy” to boxes and monotonous facades, in an environment that cried out for non-linear solutions. Sooin Oh, and Chang-Soon Choi, Associate Principals at Samoo, were given a brief that emphasized maximized views of the ocean, open balconies, operable windows and balance with nature. This involved pressure-testing tempered-glass balcony railings to make sure they could withstand winds at height without creating unpleasant or dangerous deflections into glass or open units. It also involved creating a curving, terraced, planted podium that gradually stepped up from the beach and encouraged meandering by pedestrians through several routes.

The social lens of design was also addressed by Hiroo Mori, Executive Vice President, Mori Building. Mori chronicled the history of the Japan-based development firm, calling attention to its signature “Vertical Garden City” approach to urban development, which prioritizes the co-location of high-rise office and residential, public green space, transportation systems, and cultural facilities. Mori Building has implemented this concept in numerous locations throughout Japan and abroad since the 1980s, most recently at Toranomon Hills (2014) in Tokyo.

Although many successful developers credit their achievements to combinations of bravado, timing and luck, Mori Building’s approach is research-based, albeit with a clear mission that has been unwavering for decades. Its holistic business survey, the Global Power City Index, identifies 70 metrics and ranks global cities according to these. About two weeks before the Conference, the 2015 edition was released. It ranked London #1 for three years running, largely due to the boost the city received from its successful management of the Olympic Games and custodianship of its remnant assets afterwards. Executive Director and Vice President Hiroo Mori’s home city of Tokyo ranked #4. Mori said he was determined to get Tokyo to #1 by the time that city hosts the Olympics in 2020. But rather than focus on stadia, Mori believes more steady application of his company’s Vertical Garden City, as seen at its various heavily planted and programmed, footpath-laced “Hills” developments around Tokyo, will drive the metropolis onwards and upwards, by offering “compact and holistic development that integrates home, work and leisure, thereby creating “cities to escape into, rather than flee from.”

Similarly to the other speakers, Mori saw himself and his company as a bulwark against monotony, and perhaps even as more than a shape-maker, but as a kind of social engineer who believes that tall buildings have an underexplored, humanistic dimension. In another survey, at Mori’s Innovative City Forum, the top answer to the question “What characteristics do you want to see more in Tokyo in 2025?” was “Diversity.” Though the question was deliberately general, Mori interpreted it as a question whose answer goes beyond novelty of shape and form. “It is really not just about hardware, but really about people feeling comfortable and accepted,” he said. “People can feel happy, when you are accepted by society.”