As the centerpiece of the King Abdullah Financial District, the CMA Tower is evidence of the Kingdom of Saudi Arabia’s economic diversification strategy. The faceted crystalline iconic structure, which rises 385 meters and 80 stories, serves as the headquarters of Capital Market Authority, the government organization responsible for regulating Saudi Arabian capital markets. The design responds to the design guidelines and vision set forth by the developer of the district, the Al Raidah Investment Company. The region’s climatic and environmental challenges inspired the development of a high-performance integrated enclosure system that incorporates solar shading, photovoltaics, facade lighting, and an innovative facade access system. Floor plates are designed to provide clear span lease depths that facilitate flexibility, efficiency, and natural daylight. An innovative vertical transportation system represents the world’s first large-scale use of twin and double-deck elevators in one unique system. This integral sustainable design strategy is targeting LEED Gold certification. 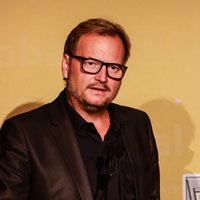 
“A Tale of Three Towers and Two Cities: A Contextual Approach to Vertical Urbanism”

A Tale of Towers and Cities: A Contextual Approach to Vertical Urbanism This presentation explores contextualism in the increasingly globalized urban habitat. While the ever increasing global interchange of capitals and ideas have created immense opportunities and growth in cities around the world, the physical manifestation of this energy in the urban habitat risks becoming generic in the face of growing global interconnectivity.

This presentation draws inspiration from selected projects around the world by Henning Larsen Architects. It draws attention to the role of public realm between tall buildings and its potential in the creation and accentuation of a local identity that fosters vibrant urban life, a quality that is diminishing in the increasingly globalized urban habitat. This presentation addresses "global interchanges" by examining its repercussions on the urban habitat, a renewed focus of CTBUH. It seeks to address the gap between local and global, and buildings and their environs, both recurring themes in the built environment of the global era. 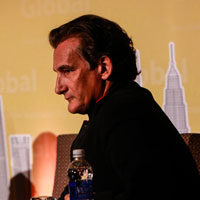 
“Reflecting on The Inauguration of The Burj Khalifa”

Reflecting on The Inauguration of The Burj Khalifa, Dubai 2010 Dubai is a city that emerged only in one decade. Though facing successive challenges it has built an attractive reputation around the world. Criticized and envied, it multiplies the superlatives and keeps being talked about. Its notoriety is impressive compared to its relative size.

Dubai holds in its name a fantastic power of attraction, and Burj Khalifa (828m, 162 floors) became the emblem of the new century. Its opening ceremony confirmed its reputation and won the crowds’ sympathy. The Burj was the most viewed building showcased on the media. During the launch show more than 2 billion people saw the event, proving the benefits of the positive image created by broadcasting around the globe.

Thanks to its impossible architecture and its record height it acquired a universal symbolic status.

People will be intrigued to discover the real amazing story behind presenting this new global icon.

This session examined various developments in the Middle East region, paying special attention to several key projects in the King Abdullah Financial District (KAFD) in Riyadh, Saudi Arabia, including the KAFD’s centerpiece project, the Capital Market Authority (CMA) Tower. One presentation looked at the building from a structural design perspective, while another explored the importance of context and how the CMA Tower, as well as several other projects, fit into their settings environmentally, cultural, and economically. Additionally, a report narrated the lead up to the flashy inauguration of the Burj Khalifa in 2010 and the role that these types of celebrations play in giving skyscrapers an urban identity.

Roger Soto, Design Principal GCR, HOK, began by explaining how the CMA Tower is evidence of the Kingdom of Saudi Arabia’s economic diversification strategy. The design of the 385-meter faceted crystalline iconic structure responds to guidelines set forth by the Al Raidah Investment Company. Soto emphasized that the extreme heat and dust in the region strongly influenced the design of the building, and went on to describe how the design addresses these climate conditions through, a high-performance integrated enclosure system that incorporates solar shading, photovoltaics, façade lighting, and an innovative façade access system that allows the building to be cleaned and maintained frequently. Soto concluded by sharing that, “The building will consume only 24% of the energy of average buildings in Riyadh.”

Louis Becker, Partner, Henning Larsen Architects, emphasized that in an increasingly interconnected world, there is a risk of buildings and urban habitats becoming generic if careful consideration is not given to climatic and cultural context. Becker went on to use several projects in the King Abdullah Financial District, for which Henning Larsen Architects created the master plan, as examples that demonstrated the importance of contextualism, including Villas in the Sky. In designing this building, Becker reported that they were inspired by traditional mud houses, which are perfectly suited to the extremely hot and dry climate of Saudi Arabia, to create their design. The Villas' façade is such that from the bottom looking up, it appears as glass, but from the top looking down it appears as a stone façade, a feature that is highly effective in minimizing solar gain. He emphasized, “You must work with the climate, and not against it; work with the culture, and not against it.”

Pierre Marcout, President & Artistic Director, Prism Entertainment Company, concluded the session by bringing the audience’s attention to the Burj Khalifa in Dubai. Upon its completion in 2010, Marcout was tasked with creating a complex lighting and pyrotechnic display to mark the celebration when the massive tower opened. He noted the importance of a monumental and symbolic launch for a new project, with a great deal of media fanfare, stressing that, “an iconic tower needs a signature.”