Energy efficiency, occupant health, and innovation were key themes on the 4 Times Square + Bank of America Tower Sustainable Technologies Tour. Both buildings provided delegates with a fantastic look at two generations of towers that focus on sustainability and quality of environment. The tour was led by Darin Reynolds of COOKFOX, the Design Architect for both projects. Delegates met in the lobby of 4 Times Square where a short presentation was given next to a model of the building, highlighting what would be covered on the tour. When it was designed, 4 Times Square was set to embed itself seamlessly in Times Square and the chaos embodied in that high-traffic tourist destination. After its completion, the tower contributed greatly to Times Square’s revival in the 2000s.

Delegates were then taken to three different floors, each showing various aspects of the tower’s energy efficiency as it materializes in the design, operation, and maintenance of the building. The first stop was the Frank Gehry-designed cafeteria that was used by Condé Nast publishing group when it was the major tenant of the building. It was easy to see why the cafeteria is so well-known, with its impressive curved glass design. Going higher up the building, delegates were shown a typical floor to view the building fuel cells, and then into the mechanical space near the top of the building.

After the tour of 4 Times Square, delegates were taken down the street to Bank of America Tower, which was completed about a decade after its predecessor. While 4 Times Square was the first multi-tenanted projects of its size in the US to adopt standards for energy efficiency during construction, operations, and maintenance, Bank of America Tower demonstrated the progress of sustainable technologies, becoming the first commercial high-rise to earn LEED Platinum certification from the U.S. Green Building Council. A focus on occupant comfort and environmental quality is evident in the tower’s emphasis on daylight, fresh air, and the relationship between occupants and the outdoors. This relationship between the building, the outdoors, and its urban context is further illustrated by the transparent corner entry. Highlights of the building’s advanced technologies included a clean-burning, on-site cogeneration plant, which produces a majority of the building’s energy; on-site water recycling systems; and a thermal storage system that produces ice at night to provide cooling throughout the building. 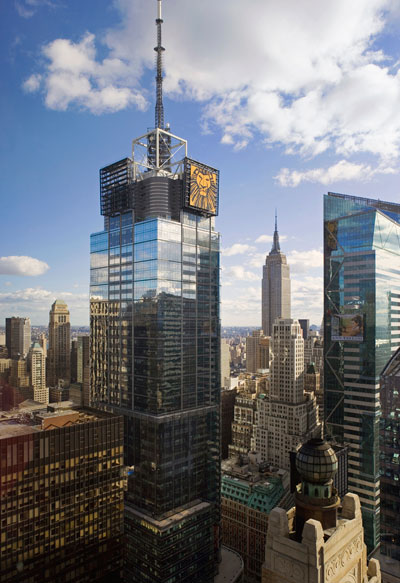