Report by Will Miranda

On the morning of October 28, delegates met in Albee Square Plaza, an open gathering space surrounded by the historic Dime Savings Bank of Brooklyn, a new retail block and the topped-out towers that make up the City Point Complex. This plaza reflected a theme that was prevalent throughout the entirety of the tour; the idea that even though Brooklyn has a new demand for residential and commercial space, it must integrate with the valuable history and heritage of the borough.

The tour began with an introduction from Susie Teal and Mark Rusitzky, of COOKFOX Architects, tucked in a corner of steel and plywood, which will soon be an entrance to the City Point Towers. Although it felt like a cold wind tunnel, delegates seemed relieved to escape the excitement and energy of the conference that took place in Manhattan over the previous three days. Soon, delegates made their way into the construction site, putting on the vibrant vests and stylish hard hats provided. It was immediately clear why these were necessary, with heavy machinery swinging and construction workers trying to get their work done before the rain came later that day. Susie Teal discussed at length the various aspects of the project, highlighting an exterior wire mesh wall that will house an art piece, possible future retailers to fill the ground floors and the Willoughby Park project coming soon across the street.

After the delegates weaved their way through the site, they started making their way down Flatbush Avenue, towards the Barclays Center. It was at this point that the rain started to come, but after packing up all cameras, phones and other electronics and pulling out the umbrellas the tour continued on. Upon arriving at the Barclays Center the tour gathered under the 30-foot (nine-meter) -high steel canopy, as Emily Johnson of SHoP Architects explained her work on the skin of the building. She emphasized the use of weathered steel, as a way to relate to the tradionionally industrial area, and she also mentioned that they used high-powered water jets to simulate years of weathering before adding the skin. As one approaches the building and looks closely, rust is still visible on the dark pavers surrounding the arena, but this gives the building a feeling like it has been there much longer than it has and its obvious why this arena has become the center of development in the upcoming DoBro area. The Chicago Bulls were practicing for the game against the Nets later that night, so, unfortunately, delegates were not allowed to enter the Barclays Center, but this did not prevent them from pressing their faces against the glass, hoping to get a peek.

As delegates made their way down the street, they entered the Pacific Park sales office, at the base of 461 Dean Street, the first building expected to complete in this massive, modular complex. In the sales office, delegates reviewed a model of the entire site, and a full scale mock up of the very modern bathroom and kitchen. After leaving the sales office, the tour worked its way around the site, with an engineer from KPF explaining the difficulties and current progress in building over rail yards, a trend in New York City that is also being applied at the Hudson Yards complex in Manhattan. At this point, the tour group looped around the site, walking by the construction barriers. As a way to make the muddy, loud construction site more enjoyable for the surrounding residents, local artists created unique, mural-eske pieces to cover each barrier.

At this point, the rain and wind started to pick up, and the group headed off in their respective ways, thoroughly impressed by the development that Brooklyn is making. 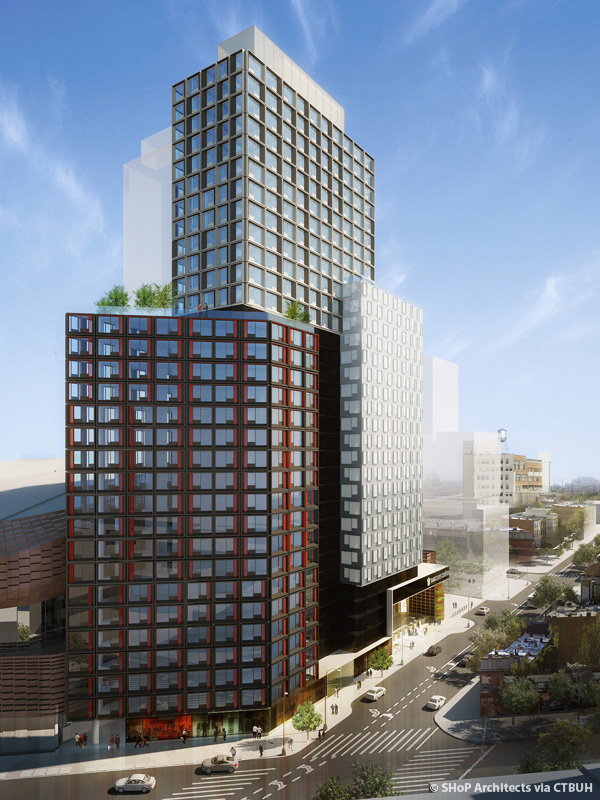