The One World Trade Center tour began in the Vesey Street lobby, whose high ceilings and marbled walls lent an air of cool reserve to fresh arrivals from the frenetic streets. Attendees were met by Rob Becker of the Durst Organization, the building’s developer, who guided attendees to the 64th floor. Here, a marketing suite shows potential configurations of office space for various types of tenants on one half of the floor, while the other half is raw space, demarcated only text and figures indicating the dimensions of the space.

The entire tenor of the marketing approach to the building indicates the dramatic change in potential clientele for World Trade Center that has taken place in the last few years as downtown Manhattan becomes fully-fledged mixed-use neighborhood, as opposed to a daytime-only business district focused mostly on the financial sector. From its emphasis on green credentials (the building’s LEED Gold status is embossed on a green wall), to its open-plan configuration and access to transit, the pitch is clearly aimed at the Millennial-generation workers in creative and technology industries. This is a marked difference from the brief for the original World Trade Centers, which was predominantly back offices and headquarters for financial trading firms.

For some tenants, the cool gray of the lobby spaces lacked color, so the response of the Durst Organization was to commission art for the space. Along the south interior wall, a gigantic abstract art piece by Doug Argue runs almost the entire length of the space. Another abstract piece dissembles a chapter of Moby Dick into a “starscape” comprised of individual letters. The tour’s most unexpected encounter was with artist Don Martiny, who was busy assembling his works for the west lobby, comprised of swirls of color inspired by the Hudson River School painters such as Frederick Church, Martiny said.

Released into the transportation corridor at the end of the tour, many of the attendees then did the obvious thing – they made a beeline for the observation deck, which opened recently. Special thanks to the Durst Organization and SOM for organizing the tour. 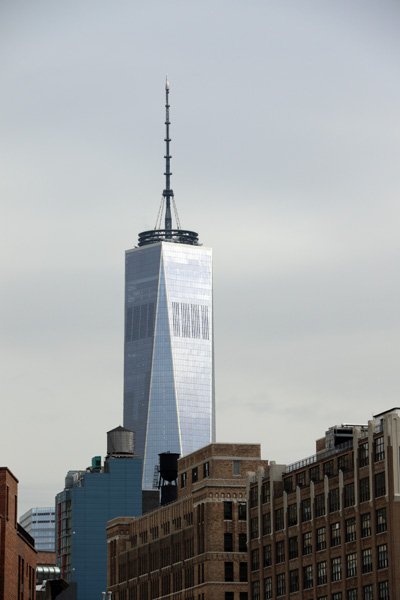