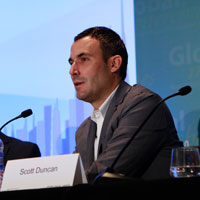 The acute global concern about resource depletion is driving a reconsideration of the tall building typology. Expectations for energy and material efficiencies are ever increasing - particularly for a highly-engineered building type like the supertall - and it is imperative that we as the designers, builders, and consumers of large quantities of these resources strive to develop solutions that place less of a burden on the planet. The Guiyang World Trade Center, a 380-meter mixed-use tower at the center of a new district of Guiyang, a city of 3 million in the hills of China’s Guizhou Province, employs an unconventional structural concrete skin that may represent a changing attitude for the design of supertalls away from all-glass towers and towards more sustainable opaque towers. 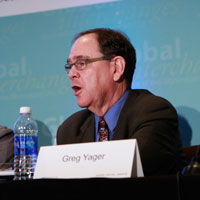 This presentation examines the strategies necessary to create responsible and profitable high-density, mixed-use developments, specifically in the Asian market. Using the Guiyang Riverside Theatre project as a case study, the challenges of optimal site, land area utilization and balancing private space with the public realm, as well as the role of the tower and the retail podium, are considered. Five principles are suggested to inform the design process: the importance of anchors, high-density retail podium vertical structure, diverse food and beverage offerings, identity and presence, and creating a district. Due to the density required to meet urban development needs and market demand, important considerations to capture the full potential value of a site are discussed. 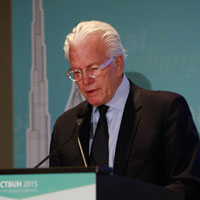 This presentation explores the nature of investment in China’s interior as a result of the 12th Five-Year Plan’s imperative towards medium-size western cities and away from the major coastal mega-cities, a marked change in migration patterns from the past three decades of growth. Focusing on Guiyang’s Nanming CBD as a case study, it proposes a set of six design strategies to translate national policy into on-the-ground city development. As the gateway to Western China, Guiyang represents an opportunity to shape a new paradigm of urban growth for this dynamic region focused on nature, culture, quality of life, and sustainability in historic city centers.

The rapid population growth and urban migration of China has given rise to a number of burgeoning second- and third-tier cities. One such city is Guiyang, a city of more than four million in Southwest China that serves as the economic center of the Guizhou Provence. This session focused on the Guiyang World Trade Center, a 380-meter mixed-use tower anchoring an entirely new district, and the Guiyang Riverside Theatre project, which will reinvigorate the old city center as both a cultural destination and business hub.

Scott Duncan, Design Partner, Skidmore, Owings & Merrill, began by introducing the city of Guiyang, describing its rapid population growth and the resultant uptick in real estate investment. Duncan said of the city, “This is an American moment for China. Guiyang is the Denver of the future.” He went on to introduce the architectural and urban design imperatives that shaped the design of the Guiyang World Trade Center, a development that will encompass a mixture of low- and high-rise buildings, ranging between commercial, retail, and residential functions. Duncan showed colorful renderings of multi-layered shopping concourses, green spaces, and of course, a 380-meter landmark tower. Duncan explained the selection of the tower’s tube-in-tube structural system, and the benefits of the opaque façade, which models predict will greatly reduce occurrences of intolerable and perceptible glare throughout the day for occupants.

“The development community, as well as the market, is driving use of glass. However, there’s an increase in – and I hope a trend in high-rises – more opacity in our buildings, and I think it makes a lot of sense,” Duncan noted.

Greg Yager, Senior Vice President, RTKL, commenced with a description of the Guiyang Riverside Theatre, contending that the positive contributions of a vertical development carry little value without due consideration for the urban experience at ground level. Regarding the planning for the large-scale development, Yager made it clear that, “It’s not just a project – it’s an urban core.” He explained the importance of the project’s retail podium, which will generate a unique presence through innovative tenant design concepts, communal amenities, and the thoughtful fusion of public spaces. Yager characterized a central challenge in planning the project, “Podiums add the experience and lifestyle value to a development . . . How do we bring these public spaces within the private realm, and maximize the value?”

Finally, Thomas Balsley, Principal Designer, Thomas Balsley Associates, discussed the overarching demographic trends and national priorities – which were clearly outlined in China’s 12th Five-Year Plan – that justified an innovative urban design strategy for Guiyang’s urban core, one that seamlessly integrates the public riverfront, a series of new city parks, various cultural amenities, a network of tree-lined boulevards, and the city’s existing and future tall buildings. Balsley emphasized that the sustainable elements of this plan are intended to be manifested from the city and district scale all the way down to the human scale. The most far-reaching of these green systems is a district-wide rainwater collection network that directs runoff to areas for aquifer infiltration and bioremediation.

Balsley concluded, “Hundreds of cities in China will experience tremendous growth in the next 15 years. The impact of this will depend on their ability to achieve sustainability.”