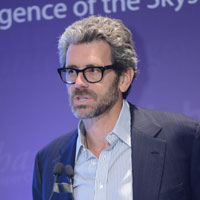 
“Empire State: Towards a 2nd Century”

A Landmark Sustainability Program for the Empire State Building Just as it did when it opened in 1931, the Empire State Building has raised the bar for the future of office space, this time in a sustainable fashion. This presentation looks at how the goals established by the Empire State Building team have been met, how the model has reverberated in private markets, and what the team leaders are doing to ensure these lessons are converted into effective and groundbreaking public policy. Michael Adlerstein shares his insights into how the United Nations Secretariat Building, an aging icon of Mid-century Modernism, was renovated to meet the security, efficiency and sustainability requirements of the 21st century, while at the same time preserving the architectural character of the building and restoring, with a completely refurbished curtain wall, the towers' compromised exterior to its original appearance. He outlines why the building was made recycled and pleads to include the preservation of existing skyscrapers in the resurgence of the skyscraper city. 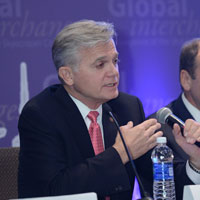 Edith Green-Wendell Wyatt Federal Building (EGWW) is an 18-story federal office designed by Skidmore, Owings & Merrill and constructed in downtown Portland, Oregon, in 1975. In May 2013 the tower’s owner, the U.S. General Services Administration, reopened the building after an extensive modernization spearheaded by Cutler Anderson Architects, SERA Architects, and Howard S. Wright Construction. The project’s suite of passive and active sustainability strategies included replacement of the curtain wall and installation of an angled rooftop photovoltaic canopy, dramatically transforming EGWW’s original drab Modernist appearance and saving taxpayers approximately $400,000 in annual operations costs. It also encapsulates GSA’s increasingly tried approach of designing a high-performance retrofit according to a building’s historical merit. The new EGWW especially reflects the agency’s desire to elevate its largely underwhelming mid-century inventory, in order to express the character of their communities as well as national ambition.

As countless tall buildings around the world approach the end of their operational lives, the question of whether to demolish or renovate is more relevant than ever. There are many factors that go into making this decision, but for buildings that have achieved iconic status, the choice to retrofit comes more easily. Presentations in this session focused on three buildings that have recently undergone significant retrofits and buildings upgrades. The owner-occupiers of each building offered presentations on the retrofits they oversaw.

Michal Adlerstein, Assist. Secretary General, United Nations Capital Master Plan, opened the session by examining the renovation of the United Nations Secretariat Building. He began by describing the history and genesis of the UN complex in New York, detailing the choice of site as well as the board of architects chosen to design the project. Next, he described the rationale behind the Capital Master Plan renovation project, which was implemented in 2008. After laying out the context for the renovation, Adlerstein discussed the project in detail, first describing the recladding process and then the interior renovations. He concluded his presentation by with some beautiful before-and-after photographs of the renovation in process.

The next speaker focused on the renovation of the Edith Green-Wendell Wyatt Federal Building, which was the CTBUH 2014 Best Tall Building Americas Winner. Leslie Shepherd, Chief Architect, U.S. General Services Administration, began by illustrating the large number of properties under the control of the federal General Services Administration, and the high cost of repairs and alterations needed for all of them. He proceeded with a compelling argument for retrofitting these properties, arguing that it is almost always cheaper and more environmentally sustainable to retrofit a building rather than building a new one. He then detailed the specific improvements made to the Edith Green-Wendell Wyatt building, including the installation of a completely new envelope and the introduction of reed-like shades to the façades.

Anthony E. Malkin, Chairman & CEO, Empire State Realty Trust, wrapped up the session with a presentation on the retrofit initiative intended to establish the Empire State Building as one of the most energy efficient buildings in New York City and the world. After introducing the building to the audience, Malkin discussed the overarching goals of the retrofit project, which included establishing a replicable model and making a business case for energy retrofits. He then discussed the project details along with the upgrades that were made possible. One of the most extensive undertakings was the retrofit of the tower’s existing windows. All 6,514 windows were removed and taken to a 5,500-square-foot glass factory that was built inside of the building, where they were disassembled, cleaned, and given new boxes that incorporated mylar sheets and were resealed with a vacuum containing noble gases. Details of all of the upgrade initiatives at the Empire State Building are available for free online, and thus have already begun to be adopted by other retrofit projects around the country.

“We set about a program to demonstrate the economic viability of energy efficiency in the existing built environment, and what we discovered was that through the integration and design of our overall program, for a very nominal cost…we could create fantastic economic return, learn very valuable lessons, and share these lessons with the world at large – and that’s what we set out to do,” Malkin said.