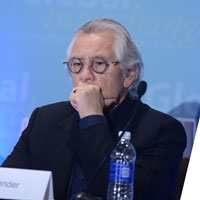 This presentation will amplify the positive physical and symbolic impact that tall buildings can have on a city. Fender Katsalidis has been at the forefront of high-density, high-rise residential buildings in Melbourne since 1995, and this typology has proven critical to the city’s energy and evolution. Republic Tower, the first high-rise residential tower in Melbourne; Eureka Tower, the tallest (at the time) residential tower in the world; and the soon to be realized 100-story Australia 108, which will be the tallest residential building in the Southern Hemisphere, have changed inner city Melbourne from a 9-to-5 working environment, into the vibrant, 24/7 "Most Livable City in the World” that it is today. 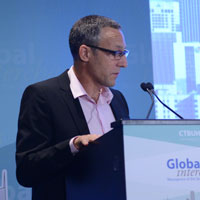 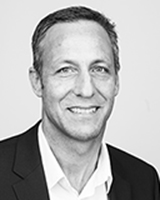 Sydney 2050 investigates how an increased height limit in Central Sydney can allow for both sustainable population growth and also benefit the public. The vision links the city’s economic development to the public benefit of a sustainable transport network. For Sydney to be sustainable with increased density it needs a Rapid-Transit system. To link development to this transport network, supertall buildings are allowed within 200m of a Metro station in the city centre. This generates a city skyline that is directly linked to and celebrates its transport system. Financially the economic uplift of additional floor space above the current height limit is linked to financing this transport system through the purchase of “Supertall Floor Space” from the government. Revenue raised will fund the Metro system by phasing out government infrastructure bonds. These principles have been quantified in a parametric model to generate a vision of Sydney in 2050. 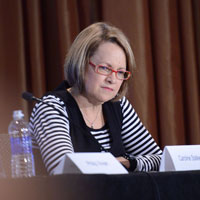 
“Beyond the Podium: Urban Spaces for Tall Buildings in a Subtropical City”

Beyond the Podium: Urban Spaces for Tall Buildings in a Subtropical City The tower and podium form is a widely accepted typology for urban intensification across the globe. However in the subtropics it may not be the ideal device for creating a sustainable urbanism, where architectural principles of porosity to light, air and breezes, and integration of landscape experience are favoured.

Brisbane City Council predicts that in the next 20 years floor space demands will translate into 50 new tall buildings in our very compact city centre. Through a re-thinking of the podium form, these 50 new buildings could have a transformative impact on the urban spaces of our city. Learning from the very practical adaptations to climate and locale of the vernacular architecture, the presentation proposes a series of typologies for urban spaces at the base of tall buildings that are well-adapted to our subtropical city, signaling a more ecologically oriented approach to creating 21st century cities.

As recently as a decade ago, Australia may not have even been in the conversation when it comes to developments in the tall building industry, but today, Australian cities are on the forefront of skyscraper ingenuity. Melbourne, Sydney, and Brisbane have expanded their central business districts with distinctive and forward-looking high-rises – many the subject of significant foreign investment from China and other places. In this session, three of Australia’s foremost thought leaders in tall building design shared their visions for the region’s urban future.

Karl Fender, Director, Fender Katsalidis, opened with an apt analogy, comparing the “high-leaping athleticism” of Victoria’s rugby legends to the soaring aspirations of Melbourne as a skyscraper city. Melbourne has taken all of 20 years to transform into a vibrant 24/7 city, which makes its tall building surge very recent, resulting in a truly modern aesthetic.

He continued with a thorough examination of typical Australian development patterns, noting that the 200-meter grid set in place by the surveyor Hoddle in 1838 had served the development of the city very well. He emphasized that current developments are working to reverse the unsustainable trend of unbridled horizontal sprawl with the need to think vertically if the country is going to address its energy production and pollution woes. This concern has been central to Fender’s work over the past decades, initially seen in projects like Melbourne Terrace and Republic Tower, and culminating in the city’s current-tallest building, Eureka Tower, and the forthcoming 317-meter Australia 108.

Echoing the benefits of height in a dense central business district, Philip Vivian, Director, Bates Smart, presented a proposal by the firm called Sydney 2050, which calls for the relaxation of height restrictions in key areas in order to adequately plan for the city’s projected population of 7.2 million by 2051.

Central to the plan is a nodal approach to skyscraper development, with clusters of towers focused around four of the city’s most active areas, all connected by an expansive Metro system. Sydney is one of the few large cities in the world that presently does not have a Metro system. The location of the nodes and clusters of tall buildings that would exceed the current height limit would be such that Centerpoint Tower would remain isolated and iconic in the skyline.

Vivian presented a convincing argument for the plan, predicting major increases in nearby property prices and the creation of numerous public spaces made possible by a set of rigorous urban design guidelines.

A similarly forward-looking proposal was presented by Caroline Stalker, Director, Architectus, for Brisbane – albeit with a green-tinted twist. Stalker noted the challenges and huge potential for design in subtropical zones such as Brisbane. Many of the world’s fastest growing cities are in subtropical zones, so the work being done in Brisbane can serve as a good precedent for other developing cities.

Stalker painted a transformative picture for the city’s downtown area, with an assorted drapery of vegetation covering the walls and roofs of Brisbane’s tall buildings. By expanding the design toolkit of the city, she envisioned a new urban fabric punctuated by urban undercrofts, stepped garden terraces, laneways, courtyards, and subtropical “loggia.” Through a combined network of these elements, Stalker imparted a compelling vision for the future of Brisbane, one that would become a model for dense sustainable urbanism is subtropical cities.