The San Francisco Regional Tour was kindly supported/organized by:

Day one of the tour started with lunch at Arup’s office at 560 Mission Street. Attendees were able to make introductions and network over lunch before convening in an adjacent conference room where tour organizers presented on each of the buildings that would be toured through the rest of the day. This gave attendees the chance to learn the background of the projects and ask questions in the quiet of a conference room rather than trying to do so in the midst of active construction sites.

The first stop on the walking tour that followed was 222 2nd Street, a 113-meter office tower that will be anchored by tenant LinkedIn. Ben Tranel of Gensler led attendees through a tour of the building, which was only a few months from completion. The immaculately detailed lobby was nearly finished. The walls and ceiling are covered in four-inch teak wood paneling that was sent to Hong Kong for manufacturing, with corner pieces pre-fabricated and shipped back to ensure the smoothest of joints. The warm wood contrasted with the stark white terrazzo flooring, which extended into built-in benches and stepped seating throughout. The glass lobby walls are designed to open up at the corner and allow public access to pass through – addressing the city of San Francisco’s requirements for providing open, public space in all new downtown projects. 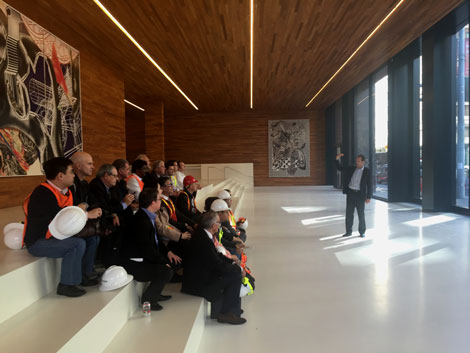 Ben Tranel of Gensler presents in lobby of 222 Second Street 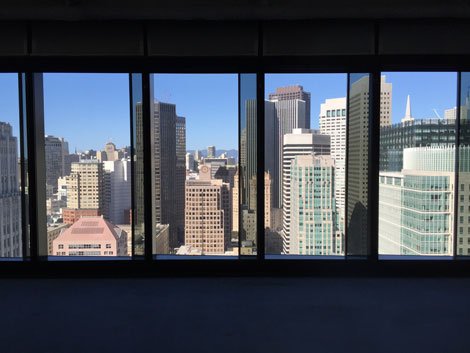 The façade of the building is comprised of shingled glass panels that switch direction at the building’s two setbacks to subtly define the massing. A tour of an unfinished upper office floor gave attendees a closer look at the façade from the inside. The seismic requirements for the tower were outlined, which would be a recurring theme throughout the tour, and not surprisingly so given the city’s location in a highly active seismic region. At 222 2nd Street, the shingled glass façade was tested for up to 10 centimeters of inter-story drift during a seismic event. 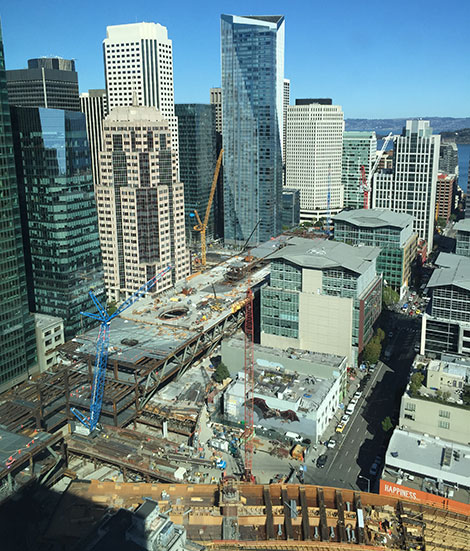 Views from the upper floor offered an overall picture of the construction around the new Transbay Transit Center and several adjacent new towers below. The Transbay Transit Center is a multi-modal transportation hub that will house a below grade train station and local and regional bus terminals. Attendees then got a closer look as they walked past the construction site of this impressive hub on their way to the next stop on the tour – a visit to the marketing center for Salesforce Tower.

At 326 meters, Salesforce Tower will be the tallest building in the city when it completes and become the city’s first supertall building. Paul Paradis of Hines came downstairs from his office to meet the tour and give a presentation on the building, highlighting the interaction the tower will have with the adjacent Transbay Center – in particular connecting to the roof level, which will serve as an expansive public roof park. The impressive marketing suite allowed Paul to project full scale façade elevations and views that would be achieved from the building once completed. Paul shared that the height of the building was approved by the city, but upon further design development, the vertical transportation system restricted the tower to 61 office floors, and made the addition of an observation deck impractical. However, when they went back to the city to shorten the tower, the city would not allow it, which required them to add a 46-meter decorative crown to the tower.

Although the level of construction activity at 181 Fremont Street prevented attendees from touring the site, a stop on the way to the final destination outside the tower gave attendees a glimpse of the ongoing steel work as the tower rises several stories above street level. Jeffery Heller of Heller Manus Architects and Jason Krolicki of Arup pointed out some highlights as attendees passed the site. A mixed-use residential-over-office tower, 181 Freemont will reach 244 meters to the tip of its spire. An innovative mega-brace system was developed, incorporating viscous dampers to reduce wind vibrations (enabling the removal of a tuned mass damper on the roof), while buckling-restrained braces and uplifiting megacolumns reduce the seismic loads on the structure. These features helped to reduce the structural steel required by 25 percent and freed up the penthouse level as leasable area.

The final stop of the day was 350 Mission Street, a 126-meter office tower, at which David Shook of SOM led the tour. Also nearing completion, the lobby was largely finished with a unique wood flooring of cross-cut square units, which was being assembled – though it was mostly a large pile of the cut wood pieces being left to dry out. Quiet pops could be heard throughout the tour of the lobby coming from the pile as moisture escaped the pieces. Like 222 2nd Street, the lobby of 350 Mission is designed to be transparent and open, with 27.5 linear meters of glass panels that slide open to blur the threshold between public and private realms. The building’s proximity to neighboring towers on two of its sides required special fire proofing to meet code. Each façade panel on these elevations is equipped with a direct sprinkle ring system that will shower the panel in water should a fire incident occur, including a fire in the neighboring building. 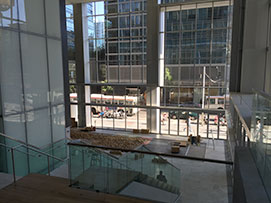 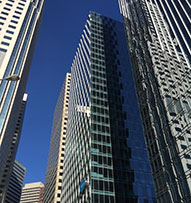 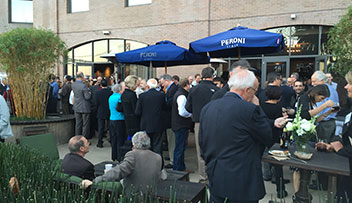 After a few hours rest from the day’s walking tour, attendees were welcomed to Langan’s client party that was happening that evening. Attendees were treated to dinner and cocktails along the city’s waterfront and had the chance to network with local professionals also in attendance.

Day two of the tour started with breakfast at Gensler’s office and, again, informative presentations and Q&A sessions on the buildings to be toured that afternoon. A short walk from Gensler’s office, attendees arrived at 399 Fremont Street, a 122-meter residential tower. Representatives of the building’s architect, Solomon Cordwell Buenz, led attendees through the construction site. A visit to the rooftop, which will later become an amenity space for residents, offered incredible views of the Bay Bridge and surrounding neighborhood. A walk through a typical floor, currently only framed out, gave attendees a sense of the unit layouts and scale, while a trip to the roof of the seven-story podium showed additional amenity spaces including an outdoor pool area. 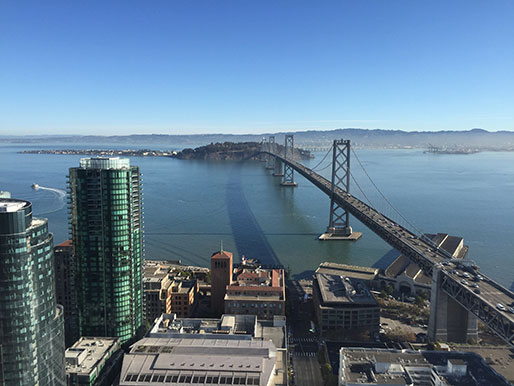 View of Bay Bridge from roof of 399 Fremont Street 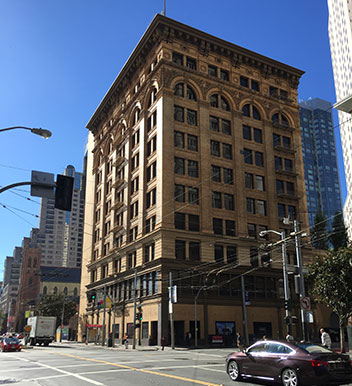 The tour concluded at 706 Mission Street where Ramin Golesorkhi of Langan led the final leg. At 155 meters, 706 Mission will be a mixed residential/office tower which had not yet broken ground. What makes the project unique is that it will include a historic 10-story structure originally built in 1909. The new tower will rise immediately adjacent to this building and tie back into it. The project scope includes a full renovation of the original tower and conversion from office to residential units. Standing outside at a neighboring plaza, Ramin described the unique foundation challenges the project presents and outlined how the tower would have to be constructed and given time to settle before ultimately tying it back into the historic structure. Attendees then toured the existing 1909 building, whose last tenants were currently finalizing their move out so that work could begin on the conversion. Attendees noted the beauty and detail of the original façade, which would be restored.

Group Photo in the lobby of 222 Second Street