Miles and Shirley Fiterman Hall is the southernmost piece of the Borough of Manhattan Community College (BMCC) campus in lower Manhattan. The 14-story building, designed by Pei Cobb Freed & Partners, is most notable for its innovative “Vertical Campus” model.

The group began the tour in a small conference room where they were treated to a presentation from Pei Cobb Freed & Partners’ Min Lee and Craig Dumas. Lee provided some historical background, noting that the original Fiterman Hall was built in 1959, but was severely damaged in the attacks of 9/11 when World Trade Seven collapsed against it, and had to be completely rebuilt.

Dumas explained the main objectives of the design, and the challenges of building such a dense campus building on a small site in Lower Manhattan. He encouraged the group to take special note of the vertical transportation systems in the building. The building's grand staircase ascends from the lobby to the fourth floor, and there are two spiral staircases – one rising from the fourth floor to the 10th, another from the fifth floor to the 14th. Escalators and high-speed elevators add to the convenience of the new building, which Dumas noted increases BMCC’s classroom capacity by about a third.

The group then embarked on a tour of the building, where from various points, they enjoyed views of the East River, Hudson River, Wall Street area, and Midtown skyscrapers. The tour included a tour of a classroom, music ensemble practice space, a computer lab, and one of several public spaces dedicated to community use. The group stopped on one of the lower floors to explore an open atrium space, which are on every two floors.

Dumas explained that the institution is aimed at commuting students and part-time students that are working in other parts of the city, so the campus is open 24/7 and classes are held at non-traditional times. Thus, they endeavored to make the design as flexible and convenient as possible, with an emphasis on useful public space for students. Dumas proudly noted that one student had remarked of this campus building, “[Fiterman is] different from other buildings on campus. There’s a lot of light. It’s very joyful.”

The group concluded their tour with a visit to the gallery featuring a rotating gallery of student art on the first floor. 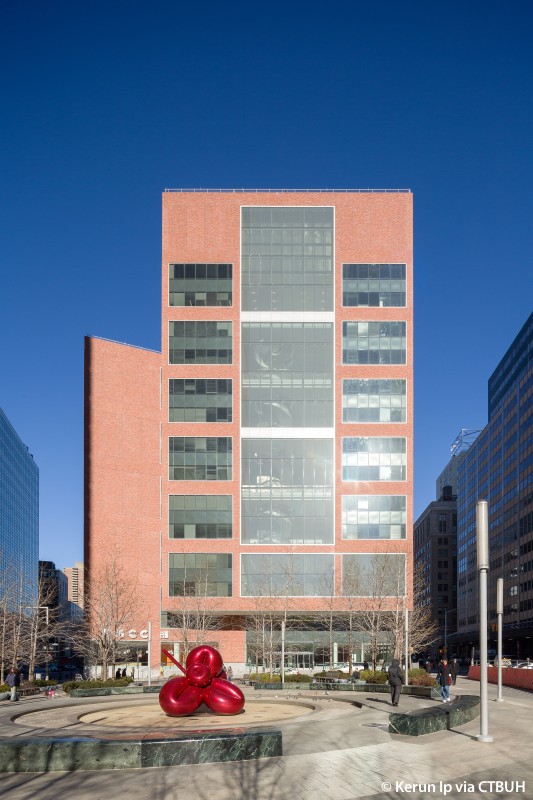