NEW YORK CITY – Exciting progress is being made for the 2015 CTBUH Conference, to be held in New York City October 26-30. The second Conference Steering Committee meeting was held Feb. 24, hosted by Kohn Pedersen Fox. More than 25 New York–based members firms met to discuss the progress of the Conference planning in a meeting led by CTBUH Chairman David Malott and CTBUH Executive Director Antony Wood, who was in New York for a week of meetings in support of the Conference. The group discussed the progress of the Conference, including overall progress of abstract submissions, speakers, confirmed sponsors, organization of regional and technical tours, media and supporting partners, conference promotions and social events.

The Steering Committee meets at the offices of Kohn Pedersen Fox

The Steering Committee learns about the early progress of the 2015 Conference.

Abstract submissions were due Jan. 30th and CTBUH received over 500 abstracts from 33 countries! Notifications for accepted abstracts will be sent on March 20th, with the full paper submission deadline set for May 15th. Registration for the 2015 CTBUH International Conference opened on Feb. 18th and the first 100 paid Full Conference Package registrants will be able to attend the exclusive Opening VIP Reception at One World Trade Center. Early-bird registration ends on April 30. After that date, the rates will increase. Additionally, hotel registration recently launched, offering special rates for rooms at the Grand Hyatt New York to Conference registrants.

Members of the Steering Committee have been playing an integral role in supporting the Conference, by reaching out to their individual networks to increase the support of the CTBUH. As the world’s leading resource for professionals focused on the design, construction, and operation of tall buildings and our future cities, the CTBUH is continually looking to grow its membership and network. Efforts from members of the Steering Committee to connect the CTBUH with industry colleagues have made a significant impact on connecting the CTBUH with major developers and other potential partners in New York.

The day also included a tour of the new Tallest Building in the United States and North America, One World Trade Center. CTBUH representatives were given a tour of the building by members of The Durst Organization. The tour also included a look at the space where the CTBUH 2015 New York Conference Opening VIP Reception, hosted by The Durst Organization and sponsored by ThyssenKrupp, will take place. The Opening VIP Reception is an exclusive event, open only to the first 100 paid Conference Full Package registrants.

The view of New York City from One World Trade Center.

One World Trade Center is America’s tallest building and an indelible New York landmark. The 104-story building features a grand lobby and observation deck with unparalleled views. The reception at  One WTC will provide delegates with an unforgettable experience, as they enjoy an evening in a modern symbol of American resurgence. 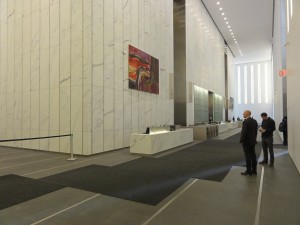 The ground floor lobby of One World Trade Center. 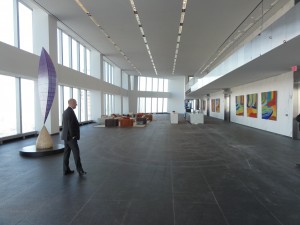 Inside One World Trade Center.