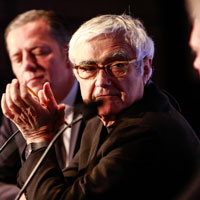 Challenges and Benefits of Integrating Public Space into Tall Buildings The integration of publicly accessible amenities into tall buildings is a desirable approach to expand the use of a given building to ever-broader segments of the surrounding urban populations – creating a sense of community that centers on the public amenity and dispelling the notion that the building is devoted to a privileged few. Space typologies including restaurants, viewing platforms, and sky gardens are common. Dedicated, segregated circulation systems for visitor access, service access, and egress, may be required depending on the size and nature of the amenity, augmenting core requirements of the building as a whole. Rafael Viñoly will elaborate on this theme, including varied planning approval processes and agency requirements worldwide, with a focus on three examples: Samsung Jongno Tower in Seoul, South Korea; Mahler 4 in Amsterdam, Netherlands; and 20 Fenchurch Street in London, United Kingdom. 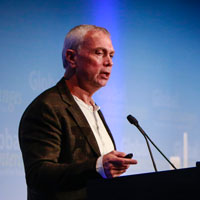 The Fifth Façade: Designing Nature into the City New York’s most iconic buildings, the early 20th-Century high rises, were designed as aspirational symbols of urban life with carefully sculpted forms that mediate between the great height of the structure and life at street level. These stepped skyscrapers created a “fifth façade” of roofs, terraces, and balconies that took advantage of daylight, natural ventilation, and preserved views. Inspired by biophilic design, New York City architects are designing new urban highrises as modern interpretations of the materiality and language of these early buildings, repurposing iconic sculpted forms to integrate nature into the built environment with a fifth façade of planted space. This presentation discusses architectural precedents and their modern interpretation as environmentally responsive New York high rises. 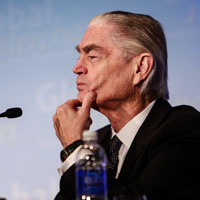 In urban centers dominated by tall buildings, access to outdoor space is important. We will explain how two urban office building developments provide valuable outdoor open space in different ways. In Chicago, the development involves transforming an open urban scar into one of the city's largest public landscaped areas. The development is located on a key CBD site along the Chicago River. The result is a unique 52-story structure of which enclosed ground floor space occupies <25% of site area; offering public landscaped open space. Result: A Tower in the Park. In San Francisco, a developer is building a 42-story tower that covers virtually the entire site, with at-grade outdoor space limited to recessed entries. This lack of outdoor space is overcome on the upper floors, which feature large outdoor landscaped terraces. Total area of terraces almost equals the ground floor site area. Result: A Park in the Tower.

In the words of the session chair Javier Quintana de Una, “the struggle between public and private space has made the increase of density more difficult.”

Contemporary skyscraper construction is increasingly blurring the lines between natural and built environments. Often mistakenly characterized as the antithesis to the natural environment, tall buildings can provide unique opportunities to connect building users with vegetation, social spaces, and urban landscapes. This session examined the many ways that tall buildings are integrating natural landscapes and public spaces into their designs. Three renowned architects presented their own unique visions for integrating natural and built environments and public/private spaces within and surrounding skyscrapers.

The session started with a presentation by Rafael Viñoly, Principal, Rafael Viñoly Architects, who described the public spaces that he has designed for several of his recent projects. He spoke to the ongoing issue that every project does not have clear, as of right conditions. The public has become more and more significant. People are coming to terms with the presence of tall buildings on the skyline, but questions remain as to how one regulates, or doesn’t, the ability of the public to access the vertical space in tall buildings. In reference to the issue of New York City, he cited that people generally thought that the idea of “the village” would continue, but that the pressures of density must be taken into account.

He presented several projects that addressed ways that public access could be provided throughout the height of a tower. These included his Buenos Aires project that had different levels of connective public space located high up in the tower. He also presented his ideas for 432 Park Avenue in New York City. He is hopeful that the open structural frames that are necessary at intervals along the height of the skinny tower will be realized as garden elements.

Richard Cook, Partner, COOKFOX Architects, next offered a presentation on the role that a building’s roof can play in connecting the structure to surrounding nature. He referred to his incorporation of nature into architecture as a “fifth façade.” His firm embraces the seven generations rule wherein every deliberation must consider the impact on the next seven generations. He feels that we have biologically evolved to connect to nature and with the global shift of global populations to urban centers, new ways of incorporating natural elements in the city are required.

His presentation focused specifically on buildings in New York, starting first with some of the city’s more historic structures before moving on to contemporary structures with expansive roof top amenities. Early structures even had vegetative decorations. Cook drew a direct-line comparison between the historic structures, which utilized existing step back designs to create rooftop spaces, to modern high-rises, which are drawing on advances in biophilic design.

The final presentation of the session was delivered by James Goettsch, CEO and Partner, Goettsch Partners. Goettsch discussed two different approaches to integrating the natural environment with tall buildings, drawing on examples from his own work, one where the vegetative space was located at grade and the other dispersed throughout the levels of the tower.

He began with a discussion of 150 North Riverside in Chicago, which devotes the majority of its ground-plane to a public park due to restrictive site requirements that required a narrow footprint for the building. The provided park will be the largest privately owned public park in the city, raising the amenity level for the entire neighborhood. The unique approach to the structure – with the cutbacks at the base - is able to leave 78% of the site open.