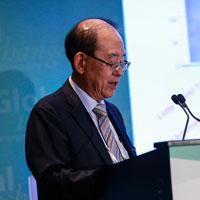 The Jamsil Lotte World Tower, a high-rise component of the 2nd Lotte World Amusement Complex, is being constructed at Jamsil, Seoul, Korea. This 123-story building with six underground levels consists of a mall, offices, residences, a hotel, and an observation deck at the top of the building. The height is 555m and it will be the tallest building in Korea. The lateral load resisting system is composed of central RC core walls, two sets of steel outriggers, eight RC mega-columns, and two sets of steel belt trusses. The uppermost lantern is made of exposed diagrid frames. A series of wind tunnel tests were conducted and the results were reflected in the structural design. To prevent any structural robustness, important members like spandrel girders, belt trusses, and perimeter columns were designed to have redundancies. Structural Health Monitoring has been performed to assess the current state of system health. 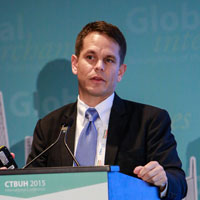 Logistical and Structural Design Challenges of the World’s Tallest Statue The Statue of Unity, a statue of Sardar Vallabhbhai Patel, is slated to be the world’s tallest statue at 182 meters in height. It will be constructed at the Sadhu-Bet Island, 3.5 kilometers south of Sardar Sarovar Dam at Kevadia in the Narmada district of Gujarat, India. Following the conceptual design, planning, and programing of the authors, the project has been successfully tendered and the design-completion and construction began in 2015. The project is expected to be completed in 2018. Of the many challenges facing this project, this presentation details the logistical and structural challenges associated with the conceptual design and planning. Downstream of the Narmada Dam, the Statue of Unity project is surrounded by remote, mountainous terrain providing uncommon logistical and construction challenges. The Statue, with exposed feet and lower legs—i.e., inverse proportions to all other large statues—posed significant structural design challenges requiring unconventional structural solutions. 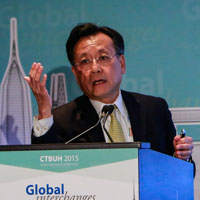 
“A Non-Coplanar Exoskeleton Supertall for Chengdu” The city of Chengdu is quickly becoming the center for high-rise development in southwest China. The focal point of this new vertical landscape will be the Chengdu Greenland project with its 468-meter mixed-use main tower. The tower’s complex architectural geometry consists of facets sloping in all directions to resemble the region’s snow-covered mountains. Accordingly, the structural design adopts a non-coplanar 3-D exoskeleton system that integrates columns zigzagging along the height and steel mega braces on the edges of the surface facets. The tower will also be China’s first supertall building to adopt a tapered tower core. Tapering the core avoids the need for wall transfer or thicker walls at the lower levels to support the upper walls. The design features above allow the structural support elements to be seamlessly incorporated in the tower's complex multifaceted architectural shape, minimizing intrusion of structure into usable space, and thus increasing the building's efficiency.

Asia has come to the forefront of tall building design, largely because teams of developers, architects, and engineers in the region are experimenting with new forms and methodologies that are reliant on innovative technologies. Each of the three speakers discussed projects that are in various stages of development, and the technological solutions that elevated their projects from ambitious ideas to models for future development.

Jong-Ho Kim CEO & Chairman, Chang Minwoo Structural Consultants, began the session by introducing the structural components of the Jasmil Lotte World Tower. Due to its location in the earthquake-prone region of Seoul, the tower uses a unique combination of lateral load resisting structural elements. Kim described in detail the various components that have been included in the tower, beginning with the foundation and working up towards the diagrid “lantern” structure, which functions as a crown for the building. He explained the rationale behind the inclusion of each individual structural component, and provided several examples of solutions that were left out of the final design.

William Howell, Project Manager, Turner International, followed up with a presentation on the logistical and structural challenges of constructing the world’s tallest statue at 182 meters, being constructed in the Narmada District of Gujarat, in honor of Sardar Vallabhbhai Patel, a former Deputy Prime Minister of India celebrated for his unification efforts in the region. The lack of easy access to the building site due to its remote location, and the local area’s rough terrain are both significant challenges to delivering construction materials to the site.

Howell informed attendees of an interesting campaign that will tie the statue into the culture of India, explaining "As part of a means of connecting the people, and particularly the farmers of India, with this Indian national monument, there's been a nationwide LOHA campaign in which iron tools have been collected from farmers around India with the intent of them being melted and converted into rebar for use in the statue's structure. Therefore the people and the farmers of India will be integrally linked with this statue."

The statue’s design is unique for it exposed feet and legs, whereas the world’s tallest statues tend to hide lower extremities, presents the significant structural challenge of having inverse proportions. The structural solutions to this issue were two cylindrical RC cores to match diameter of legs, and a steel space frame to support cladding.

Dennis Poon, Vice Chairman of Thornton Tomasetti delivered the final presentation, characterizing the challenges of designing a non-coplanar exoskeleton for the supertall Chengdu Greenland Tower in Chengdu. The 468-meter mixed-use main tower features a distinctive multi-faceted surface that breaks the exterior into adjacent triangles located on uneven planes. This design uses columns, bracing, and spandrel beams to produce a non-coplanar exoskeleton. The challenges and advantages of this system include irregular floor plans and integrated lateral stability. Poon emphasized that “Building outrigger systems is time-consuming and so we continued redesigning and planning where to place outriggers, until finally we had three levels of outrigger systems instead of four. We saved 700 tons of steel and another month of construction this way.”