The Los Angeles Regional Tour was kindly supported/organized by:

Los Angeles is a globally-oriented Southern California city famed as the center of the United States’ film and television industry. The second largest city in the country, Los Angeles is a sprawling metropolis, surrounded on three sides by mountains. The city is home to renowned institutions covering a broad range of professional and cultural fields and is one of the most substantial economic engines within the United States. The city’s architecture comprises buildings by many renowned architects such as Frank Lloyd Wright, Frank Gehry, Renzo Piano, Richard Meier, and Rudolph Schindler.

Downtown Los Angeles with the San Gabriel Mountains in the distance.

Although Los Angeles is considered to be a “flat” city, lacking a large number of high-rises, it is home to a dense and growing urban core. The city is currently in the midst of a minor building boom, with five skyscrapers over 150 meters currently under construction – equivalent to roughly 20 percent of the current tall building stock. This includes the Wilshire Grand Center, which at 335 meters will be the tallest building in the city when complete. The city previously went through a much larger building boom that lasted from the early 1960s to the early 1990s, during which time it saw the completion of 30 of its 32 tallest buildings, including the U.S. Bank Tower, Aon Center, and Two California Plaza. 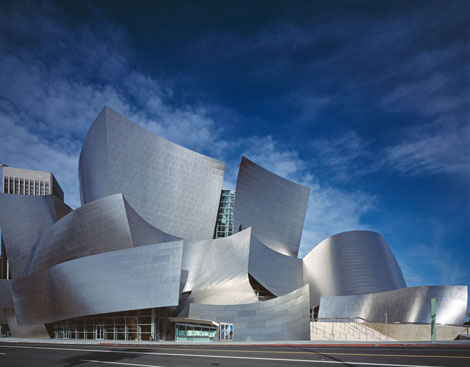 While the city appears to be re-embracing the tall building typology after a fallow period, Los Angeles still faces challenges in skyscraper construction due to the city’s high rate of earthquakes and its position near the San Andreas Fault. Attendees of the Los Angeles Region Tour discussed these challenges among a number of topics as they toured the City of Angels. The two-day event featured a number of exciting visits to Los Angeles’ famous architectural attractions as well as new developments, all kindly organized by Thornton Tomasetti.

After three long days of lectures, networking, and technical tour opportunities in New York, attendees flew to Los Angeles to complete the week-long conference in a warmer locale. The first day of touring began at the Walt Disney Concert Hall, designed by Los Angeles native Frank Gehry. Opened in 2003, the concert hall features a stainless steel façade and is home to the Los Angeles Philharmonic.

Next the group traveled on foot to the nearby Grand Park, a recently completed 12-acre (five-hectare) park located between Los Angeles City Hall and the Los Angeles Music Center. The pedestrian-friendly park was constructed as part of the larger Grand Avenue redevelopment project aimed at improving the city’s downtown atmosphere. The group had an opportunity to stroll the park, enjoying a number of Día de los Muertos art pieces.

Quickly approaching lunch time, the group stopped for a bite to eat at LA’s historic Grand Central Market, which has been in continuous operation since 1917 and houses dozens of food stalls. The market offered a prime example to attendees of the type of business required to cultivate an active downtown environment.

The rest of the afternoon’s activities consisted of a walking tour through downtown LA led by the Los Angeles Conservancy. That evening, an optional happy hour at the revolving Bona Vista Lounge, located on the 34th floor of the Westin Bonaventure Hotel, gave attendees the opportunity to take in soaring views of downtown LA while relaxing over drinks and appetizers and reflecting on the day’s activities. 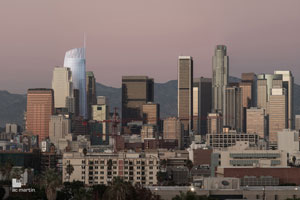 A rendering of the under-construction Wilshire Grand Center as it will appear on the Los Angeles skyline.

Day two of the tour began bright and early with breakfast at the office of Thornton Tomasetti provided by the design and construction team for the Wilshire Grand Center. Over breakfast, the group learned about the design history of the tower as well as the structural challenges inherent in its design. Following breakfast, the group had the opportunity to tour the under-construction building. Because they were going to an active construction site, everyone was required to wear hard hats and safety apparel.

The tour of the building offered attendees the opportunity to see it in a prefinished state. As a result, they saw exposed structural elements and other pieces of construction that will otherwise be covered when the building completes. The visit to the Wilshire Grand could be considered the culmination of the Los Angeles Regional Tour, as it gave attendees the opportunity to view the construction of the city’s tallest tower up close and with unrestricted access.

After completing the Wilshire Grand tour, the group made one last stop to the recently completed BROAD museum, designed by Diller Scofidio + Renfro. Here they were able to explore the galleries while enjoying the pristine architecture of the building.

Though the two-day Los Angeles tour did not come close to fully exploring such a large city, it was an excellent primer into the new developments reshaping the city’s urban core. As construction proceeds in downtown Los Angeles, the city will continue to transform itself. Although the central business district will never have the same density as its counterparts in New York or Chicago, the work being done to improve it suggests that there is more to Los Angeles than just urban sprawl.